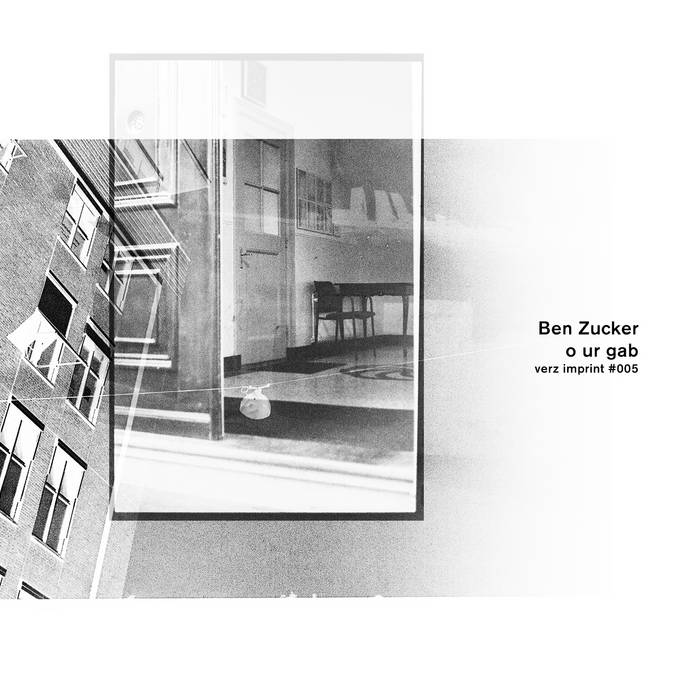 Suppose, by some happenstance, it occurs that the expression: “extended vocal techniques”, (e.g. vocal multiphonics), is not an extension of anything, but only inappropriate language description of functions already present in the trachea?

Ben Zucker is a composer of sonic/conceptual situations, experimenting with the art music tradition, improvisation, technology, and theory. His previous album, Confluere, merged his multi-instrumental solos into a broad composition, noted as “a testament to the power of restraint and arrangement” (Decoder Magazine). Here, with similar restraint, he tips the hat to Kenneth Gaburo’s system of ‘compositional linguistics’ and goes in a decidedly different direction. Drawing upon experience as a choral and improvisational singer, o ur gab is less a solo vocal album than an album of mouth music.

At the center of o ur gab is 'neither/n/nor/n', an un-spoken word piece drawing upon texts related to linguistic meaning only to remove all such content. First premiered as part of the Weisslich concert series in London, and presented in a studio multitrack here, the piece renders texts by Roland Barthes and Kenneth Goldsmith as wispy chorales of unvoiced consonants.

Surrounding it are a pair of extended works made of multitracked and rearranged improvisations. catalyst of one’s own positioning takes its title from a Simon Proll essay on vocal distortion in black metal from the Helvete journal, while the mouth is the beginning, an apt summary of the entire project, is a phrase from an entry in the Critical Dictionary by Georges Bataille. From the mouth, bubbles, squeaks, growls, and airs normally too quiet for consideration are brought to the fore, a catalogue of gestures attempting to submerge traces of the voice in its own noise, and seeking as a referent the noise of electronic and ambient music. Altogether, the album recognizes language as one particular technology of the voice, and seeks to work with another, not quite fully formed and discovering on the way.

"What if Zucker was to perform these pieces live? How close would I have to stand to hear a tongue squashing itself against the front teeth, or to feel every audial ridge of those injured pigeon coos, or to sense Zucker’s mouth changing shape as he emits a mere hiss of breath through his constricted throat? It unsettles me to think about it. It’s likely that his mouth would need to be wrapped round my entire ear, lower lip hung and quivering beneath my lobe, hot breath condensing upon the inside of my canal. After all, most of these sounds barely escape the mouth. Many of them sound like experiments in self-amusement during long stretches of solitude (tongue rolled gently against the roof of the mouth) or the absent-minded leakages that occur during moments of intense concentration (squeaks of inhalation through tight lips). These actions aren’t intended to be projected outward. They’re meant to loop back into the ears of their creator, drifting up through the skull or curling through the air immediately surrounding the face – if, that is, they’re meant to be heard at all.

For this reason, the breath has a subdued, restricted role on o ur gab – applied lightly enough to stimulate sound, yet still insufficient to puncture Zucker’s bubble of privacy. On “neither/n/nor/n”, he plays delicately with the shape of each exhalation, co-ordinating throat and teeth to force it through different channels like playdough-maker shapes, dragging consonants into ribbons of mouthly muscle tension, extending f’s and sh’s and r’s into hisses that crackle with interruptive moisture. On “the mouth is the beginning” (perhaps a subtle denial of the age-old recommendation to sing from the diaphragm), Zucker toys with those sounds that rely on the mouth as their primary point of conception: the repetition of “me” and “cho” for instance, which wait for the teeth and lips to release the consonant and liberate the vowel, casting the mouth as gatekeeper and the breath as the dependant. There’s a reassurance to hearing the mouth in such a dominant role. For those incessant, mouth-runner ramblers like me, who are often met with the cliché instruction of “don’t open your mouth unless you’ve got something to say”, Zucker’s music speaks – or rather, doesn’t – to the power of permitting the mouth to essentially adopt a state of autonomy from the body and mind, unmoored from the obligation to communicate to anyone, creator included."
ATTN:Magazine - www.attnmagazine.co.uk/music/12404

Bandcamp Daily  your guide to the world of Bandcamp

Featured sounds by K.Spark and WIZDUMB, plus Basi joins the show to discuss his latest release.